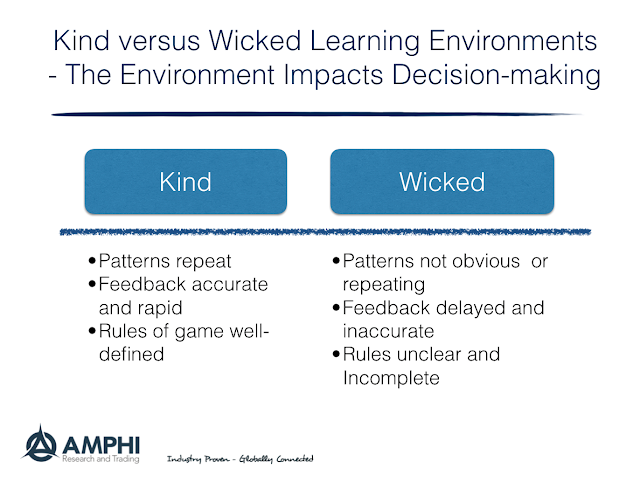 Kind learning environments are those where the rules are relatively simple, known, and there is close relationship between effort and outcome, action and results. Most video games and sports are generally kind learning environments. There exists “a meaningful feedback loop as to which decisions or actions will produce the better outcomes.” What you see is what you get.

Wicked learning environments are where the “correlation between outcomes and specific decisions or actions is ambiguous, deceptive, or non-existent.” Typically the rules, if any, are ever evolving and there is a high element of randomness, luck or chance. The stock market, business, politics, and human interactions (yes, even, perhaps especially, dating!) may be thought of as wicked learning environments. They involve complex interactions with many variables, inputs, and tremendous volitivity. Often it is very difficult to distinguish between skill and luck and what appears to deliver positive short-term outcomes may be the exact opposite of what is best for good long-term outcomes.

What good is this information? Well, awareness of the type of environment you are operating in is critical. In kind environments the past is generally a good source of information for predicting the future. In a wicked environment, the past is of extremely limited use. The first 10 or 15 years after I graduated, my MBA was fairly useful. Eventually, much of what I learned was no longer relevant, no longer useful, worse than useless if I continued to try to use it to predict the hugely altered world I now lived in.

“…most…problems in organizations [and elsewhere] are ‘wicked problems,’…but most [problem solving] methods are suitable for simple, well-structured problems. The usual approaches do not, therefore, help organizations [or people] deal with their most important problems.” – Creative Problem Solving, Robert Flood and M. Jackson (1991)

Time is Not Created EqualPrevious Article